Initially, I was planning to just devote one day to Spring Cleaning the house, but then I remembered who I was.

There is nothing in me that is going to want to stay home and clean all day.  Nothing.  And generally, our house is pretty clean, it’s just a little disorganized and cluttered, which most people usually affectionately refer to as “lived in”.  So instead of killing myself in one day, I decided to do a room a day and start today with the office.  This way I have Devon home to say “do you really need to keep this” to and he can claim why he has to keep it in his life.

But, as the rest of the house, the office wasn’t that bad.  Just disorganized.  Our office is a conglomeration (as most people who actually have an office can probably be attest to that being normal), it has our officey stuff (obviously) and some shelves that I’d never hung, but there is also Christmas stuff stored there, some of Devon’s wardrobe in the closet and it’s our laundry throw-all, which annoys me.  I avoided taking a picture of it because it’s annoying.

I mean, I’m happy that we actually have a unit that has a washer/dryer in it, so I don’t want to make it sound like I’m complaining.  But it’s in the kitchen.  So there isn’t a set laundry area which I long for.  And our office has the most “unused” space, so it just wound up there.

Though, I finally took one for the team and bought this, Household Essentials Rolling Quad Sorter Laundry Hamper with Natural Polyester Bags, Antique Bronze Frame.  Its nice.  It has four compartments, the bags lift out so you can just take a bag to the washer and wash the bags themselves, it has wheels so we can move it around when it is in the way, and it’s big enough for the both of us (because we both hate doing laundry and are guilty of not doing it for a couple weeks if we can avoid it).  So I’m looking forward to that coming.  I’m old.  I’m looking forward to getting a laundry hamper.  Oy.

So I spent a couple hours in there just straightening, hanging shelves, dusted, vacuumed, and all that good stuff.  I’m pretty happy with how it looks now.  I took a couple pictures, just for funsies.

Here is the before-ish pictures: 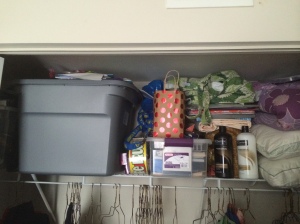 See, our closet wasn’t bad.  The top just had a bunch of crap we never bothered to do anything with.  But then there was this eyesore: 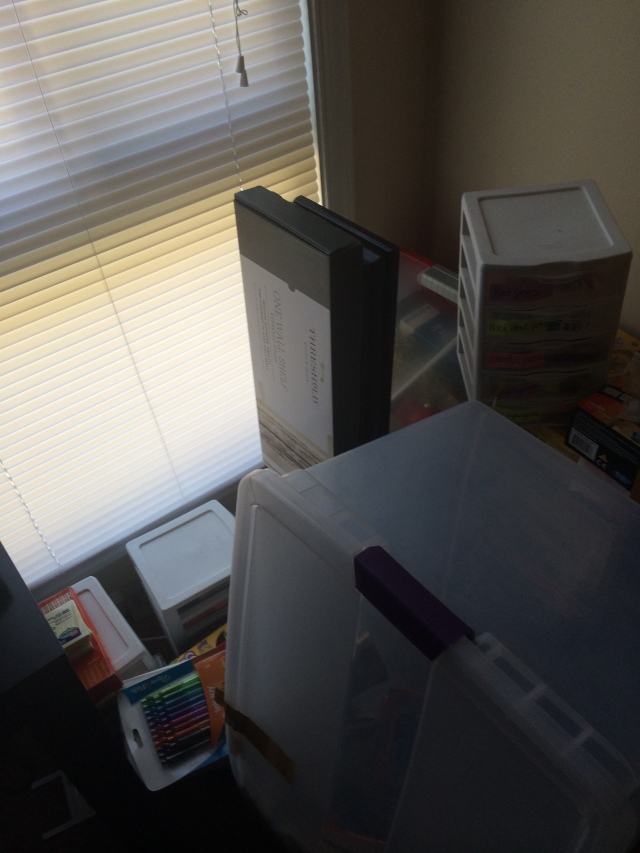 Which was just our catch-all, throw-all corner.  Yeah.  Those cute little floating shelves.  Just sitting there.

So, after a couple of hours we have:

(Do not judge our Gandalf poster.  We did go to the Hobbit-athon, remember????)

I’m gonna apologize for the weird angle.  I was trying to NOT get Devon’s desk in there (AKA Devon’s disaster) because that’s his area.  I don’t care what he does with it, I don’t bother it, it doesn’t bother me and I’m not including it in my cleaning agenda.  So, I was trying to just get the prettyness.  But shelves finally hung, yay!  I’m actually really happy about the staggering of them, too.  I wasn’t sure if I’d like it that way.  But it’s nice.

So yay!  One room done.  I think I’m gonna do the bathroom on Monday.  Cause bathrooms are fun.

One thought on “Spring Cleaning Part 1: The Office”