I swear, I promise I haven’t died, I haven’t lost my limbs or my mind (fully, anyway) or anything like that.  Life just went kind of bonkers after our anniversary.  August is usually a little chaotic, but this August just exploded.  Nothing hopelessly horrible, but super busy.  On top of it, this August was one of the hottest on record for Baltimore, so when I wasn’t super busy it was too hot to do anything but sit almost perfectly still to avoid sweltering.

I did turn 30 on August 8th.  Yay me!  I didn’t have like a crisis or breakdown or anything crazy.  My mother did, for some reason, but for me, it’s just another year, it’s not life altering or causing me to re-evaluate my life and my choices or anything like that.  I’m typically pretty content and switching to another decade wasn’t going to magically change that.

The day itself was nice.  It was super rainy, which it always is on my birthday for some reason and still achingly hot. So I spent most of the day indoors.  Devon made me full rack BBQ ribs for dinner (because he knows his lady loves her BBQ) and a pretty chocolate cake (because he also knows his lady loves her some chocolate).  OMG and he got me the ice cream maker attachment for our KitchenAid Mixer and….OMMMMGGGGGGG…..it’s amazing.  I love it.  I’ve used it like 5 times already.  Best gift ever.

So….for the past month….no….let me be honest….since April we have been having issues with our roof/ceiling.  There was a small leak in the roof, initially, which made the water hit our ceiling since there wasn’t really a whole lot covering it.  We complained a few times, maintenance lovingly repainted the water stains from the leaking once (but didn’t actually patch the roof) which was great until the next rain and it leaked again.

We had some pretty historic rainfall here in the Baltimore region at the beginning of August, so much that a historic area near me was pretty seriously damaged (read: near destroyed) from about 6 feet of water rushing the streets (you can google Ellicott City MD flooding if you haven’t seen it yet). During said rainstorm, Devon and I go into our office (which is where the roof is leaking – which was part of our main concern because we have our computers and expensive things in there that we didn’t want destroyed) and our ceiling is bulging so badly, I thought the ceiling was going to fall within minutes.

Around 7am the next morning, while we are sleeping, we hear a huge crash.  I thought I was dreaming, until I hear Devon say, “we both know what that was”.

And there is our ceiling….on the floor…..where it doesn’t belong. 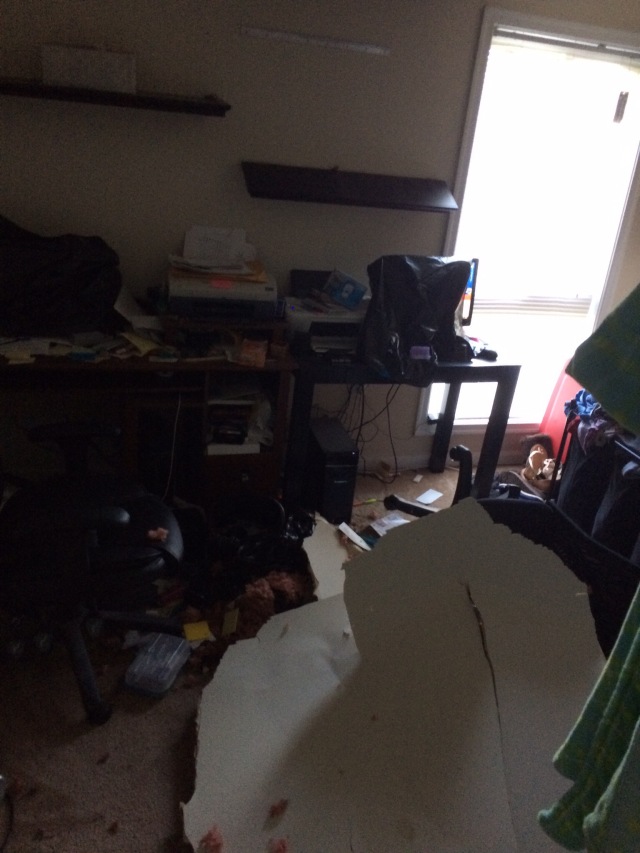 We were so heated.  I can’t even begin to tell you.  We did wind up getting an entire new ceiling out of the ordeal, but it didn’t need to come to that.  They are also finally replacing the roof…..5 months after we started saying that it needs to be fixed.  But it was the biggest headache in the world.  I’m just counting us lucky there was little damage to our personal belongings.  The roof came down about 5 inches away from our desktop computers and the only thing that was destroyed were a couple of floating shelves on the wall that are easily replaceable.  The luckiest part is that my cat wasn’t in the room because she loves to sleep in the office.  If that ceiling fell on my cat, our rental company would be in such serious trouble with me.  They don’t even want to know what would have happened.

Dealing with that took a lot of time and a lot of energy, and it was really frustrating.

Once we got that handled and once my birthday was over, we were pretty much in Back-to-School mode here.  Devon’s kids came back last Monday and mine come back tomorrow.  Between the both of us, just the last week alone, we have collectively, put in almost 100 hours into our respective schools.  It has been so exhausting, we came home Friday night and both just collapsed and slept for like 12 hours.  We both have different responsibilities this year and different challenges so there is some adjustments.

I have an intern this fall, which is great, but also a little hectic because I want to make sure she’s getting what she needs out of the experience with us.  I have a brand-new co-counselor, so in a way, I’m kind of training her, too.  Plus, a friend of mine started working at my school this year in our social studies department; which is fantastic for me because she’s a great friend and I can vent to her and just have a good time.  But I’m also sort of training her on how the school works, what her kids are like, what the schedule is, etc.  So, it’s almost like I have three people I’m looking out for and it’s a little hectic.  Hopefully, we can all settle in once the girls get here tomorrow and everything can calm down.

Right now, I’m spending the day trying to re-organize and get back into routine a bit more than I did last week and finishing laundry and cleaning, etc.  Devon has his cleaning that he’s finishing and finishing some lesson planning for the week.  My hope is that once we’re back into our routine, I’ll get back to my routine on here.  Because I’ve missed it, I’ve just been too busy and too tired when I wasn’t to do a whole lot about it.

I might still be a little sporadic for a hot minute, but I promise I haven’t forgotten about it here and I will be back regularly very soon.